Bautista reaches out to Latin prospects 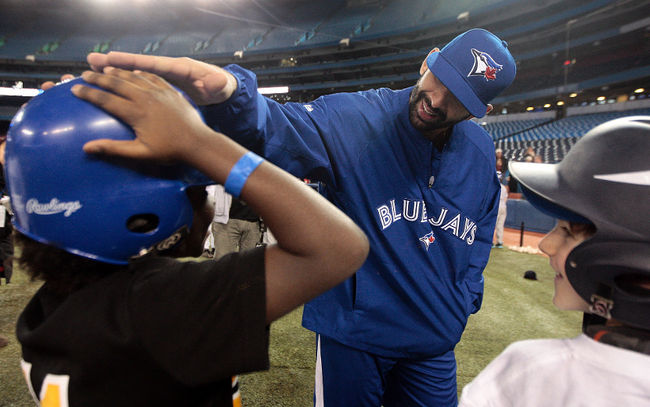 The relationship between Major League Baseball and the Dominican Republic is vexing, with a scope that goes far beyond whether Roberto Hernandez Heredia (formerly Fausto Carmona) starts for the Cleveland Indians anytime soon.

The sport’s economic system encourages elite prospects to sign at 16 and marginalizes those who aren’t talented or mature enough by then. Age falsification is common, because financial incentives exist for players and their advisers to lie. Formal education has become an afterthought.

But at a time when ethical debates are raging, here comes Jose Bautista to remind us that honesty works, education matters, and young men do a lot of growing up after their 17th birthdays.

Bautista, 31, is one of the most thoughtful players in baseball. He’s also one of the best. And now he’s pledging his personal resources to help the teenagers at risk of being coerced or forgotten by the process.

He’s just waiting for them to realize it.

“I’m ready to roll,” Bautista told me the other day. “I’ve got money sitting there. I’ve funded it. I’ve received donations. I need to find qualified kids so I can start helping them.

“Oddly enough, it hasn’t been easy. I’ve been looking for four months and found one kid — and he hasn’t graduated.”

Bautista hit the most home runs in the majors over the past two seasons. He signed a five-year, $64 million contract with the Toronto Blue Jays last February. Life is good.

But it’s never been easy. He played for four organizations in 2004 alone. He didn’t become a star until his 10th professional season. He hasn’t forgotten the perilous climb. So he started the Bautista Family Education Fund to help Latin American players afford tuition at two- and four-year US colleges and universities.

Bautista, born and raised in Santo Domingo, wasn’t one of the can’t-miss Dominican prospects. He signed at 20, not 16. He spent two years at Chipola College in Marianna, Fla., an opportunity he received for three reasons: 1) He had the academic credentials, including a command of English; 2) Chipola needed an outfielder; and 3) California businessman Don Odermann sponsored him through a scholarship fund.

Now, Bautista wants to do for others what Odermann did for him. He’s proof that Dominicans need not sign pro contracts at 16 in order to sustain their dreams. Bautista grew — physically, intellectually, emotionally — during his time at Chipola. Had he signed sooner, he might not be the same player.

“Having been through it allows me to really know some of the things that are going to help these kids be successful — or at least improve their chances of becoming successful,” Bautista said.

“The excuses I kept getting from scouts when I was going to sign as a free agent was that I was too skinny, I was too short. I wasn’t particularly fast. They said I had nice bat speed, but I wasn’t a home-run hitter. I was in between. So I had two years to keep working, to keep getting bigger in the gym. I developed more power. I gained 25 pounds.

“I had a late growth spurt, which is normal in Latin countries. No matter if you come from a good family or not, our nutrition historically hasn’t been the same as a wealthy country like the U.S. We tend to have a later growth spurt — if we do end up getting that better nutrition later in life.”

Bautista hasn’t placed residency restrictions on applicants. For example, a boy born to Latin American parents in the US would be eligible. (“I’m leaving it open,” Bautista said.) But the program is an implicit acknowledgement of the different life experiences for those subject to the amateur draft (Americans, Canadians, Puerto Ricans) and everyone else.

Players from the first group become eligible for the draft with the graduation of their high school class. If an 18-year-old from Florida turns pro, there’s a good chance his entry-level contract will include a college tuition package. Not so for the 16-year-old from Santo Domingo, who’s nudged into taking the money now because it means a better life.

For an American player, the high school diploma and college fund are insurance against failure in professional baseball. For a Dominican player who didn’t complete his secondary education, there’s no safety net. Baseball becomes an all-or-nothing dice roll in a foreign land.

The tuition package is available to Dominican players, but it’s not practical in many cases.

“Eighty percent of the (Dominican) kids that sign haven’t even finished ninth or 10th grade,” Bautista said. “What’s the purpose of offering a college scholarship to someone who hasn’t finished high school?”

Bautista, then, is targeting a different group: students with strong baseball and academic abilities who aren’t ready-to-sign superstars. He wants to help boys who have good grades, solid scores on college entrance exams and TOEFL (Test of English as a Foreign Language) and a record of community service.

“Community service is a must — not only for the foundation, but to get admitted to the schools,” Bautista said. “A lot of people forget: It’s not only about being a good player and me giving you a scholarship. You’ve got to go through admissions at these schools. You’ve got to go through the program like any other student would. A lot of these kids unfortunately don’t have the grades.”

Bautista said obtaining the student visa is one of the easiest steps in the process. As long as the student demonstrates that he has the funds to afford school and no criminal record, the U.S. consulate tends to approve the visa petition.

Meanwhile, the big question — Where, exactly, are these kids going to go? — is impossible for Bautista to answer.

In fact, he can’t select specific colleges because of NCAA regulations. Think about it: If he sets up a foundation and encourages 10 players go the same SEC school, then he would be a booster handing out extra benefits. And he doesn’t want that.

Bautista has named a board of directors familiar with college programs throughout the US, and they will advise applicants when asked. In the end, though, Bautista said the student must pick the school, earn admission and fill out the requisite financial aid paperwork. Then Bautista’s fund will try to make up the difference.

For many families, the money is badly needed. NCAA programs grant few full scholarships, because Division I baseball teams have only 11.7 to stretch across the entire roster. (Division II teams have nine.) And the financial realities are even harsher in the Dominican Republic than they are in the US.

Bautista’s plan deserves to succeed. It makes sense. He believes in the cause, because it’s the same one that brought him here. He can’t transform Dominican high schools into Andover and Exeter, but he’s establishing the right precedent: Major leaguers, even the really rich and famous ones, must remember the thousands who won’t make it, who need something to fall back on when their fastballs and finances fade.

Many Dominican teenagers who dream about the big leagues believe they must get there quickly — and on their own.

They’re wrong. In Bautista, they have a powerful and helpful ally who’s ready to show them otherwise.

“I was one of those kids,” Bautista has said.

If only he could find himself.